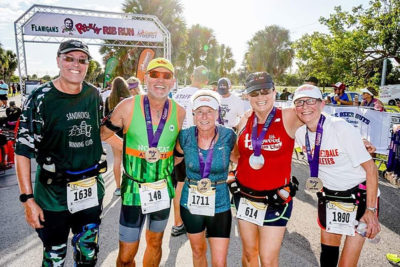 The Flanigan’s Rockin Rib 10K is a very popular road race every year.  It always sells out, probably due to the fact that there’s RIBS and BEER when you’re done!  It’s a major party every year, and Flanigan’s goes all out to make sure it is.

My training and racing partner Terri and I like to mix in 5 and 10Ks into our training plans. This way we can maintain running “base-levels” for particular tri events we are focusing on.

Race day starts out beautifully.  The air is crisp, there’s some cloud cover and everyone is raring to go. The starting gun sounds and the Flanigan’s Rockin Rib 10K is underway!  A lovely run through part of Vista View Park in Davie, FL before heading out of the park for a loop on Orange Drive.  There are so many people running at all different speeds, and the excitement of the day keeps getting passed around. It’s great to see runners of all ages and abilities out on the course.  I ran past a few of my friends and traded “high-fives” with them all.

About 35 minutes into the run, I hit the turnaround and start heading back to Vista View Park.  I catch up to Terri headed the other way with a couple of our friends – Natalie and Camila. They’re having a good time singing and running.  A few hugs and “high-fives” later, I’m back in the groove and enjoying the still-cool temperatures (even though the clouds are gone) as I get ready to cross the finish line.  Terri and her group finish about a half-hour later, still smiling and singing as they also finish.

As I mentioned before, the post-race party put on by Flanigan’s is a major event every year.  Besides the aforementioned RIBS and BEER, there were other food vendors, wine-tasting tents, live music on stage and the awards ceremony.  Being a “no meat athlete”, I forego the ribs (I gave mine to Camila).  I DID have a beer (or at least part of one).  The saltiness of the beer helps out a bit after a hot run, so I used it to speed up my recovery.

It was a great event, and I ran into a few people I haven’t seen in a while, like my former co-worker Jay who is a running fiend!  I recommend this race highly if you’re looking to do a local 10K!

Triathlete willing to share his experiences, knowledge, tips and stories with anyone who'll listen. :-)

This site uses Akismet to reduce spam. Learn how your comment data is processed.