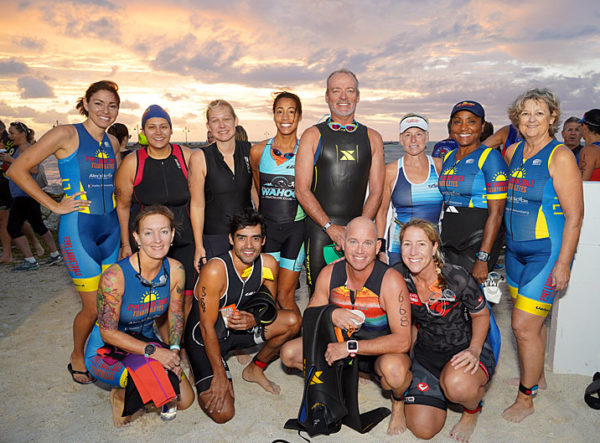 The Key West Olympic Triathlon is generally considered the last race of the season around here.  It’s the closeout to my 5th triathlon season, and what better place to celebrate than KEY WEST!!  This race also signals the return to run training for a couple of running events happening after the first of the year.

Headed down to Key West, my training and racing partner Terri and I got to check out how the keys have recovered since last year’s triathlon.  Hurricane Irma had passed through the Keys only a few months before last year’s tri, and there was extensive damage everywhere.  This year however, everyone looks well on the road to recovery with lots of new construction going on and everybody open for business again.

Race day starts out with 3ft seas on the swim course.  The stair entrance into the water was getting pounded, and quite a few looks were being shared amongst the athletes waiting for their start time.  The race organizers were offering the option for athletes to drop to the Duathlon (run/bike only), and I’m pretty sure a lot of people took them up on it.  I felt my swim strength could handle the waves on the way out to the first turn buoy, then I could always ride them back in towards the swim exit and transition. I was in a swim wave which included EVERYONE aged 55-59, so a mixed bag of male and female swimmers lay between me and the first turn buoy.

Once our wave was underway, it was like any other race start: crowded and sloppy. Once we’d been out on the course a bit, everyone spread out. The waves were making things interesting, and I had to stop a couple of times just to be able to see the next buoy! The interesting thing about the swim finish here is that you have to swim under a pier to get back to the beach and transition.  In past years, there were huge crowds on the pier cheering us on, but not this year because of construction on the pier itself. I make it to the swim exit and find the nearest wetsuit stripper to help get me out of my wetsuit, before a short run down the beach to the transition area.

Quickly locating my bike in the rack, I switch from swim-mode to bike-mode and get out of transition as fast as I can. Once on the bike course, there’s another challenge waiting – 23mph winds! “Oh boy” I think to myself, as I head over to Stock Island and then Boca Chica Naval Air Station. As you would expect, the wind both helped and hindered depending on the direction I was riding, especially when having to do the bike course as 2 loops.  I managed to average about 25mph WITH the wind, but dropped significantly when riding INTO the wind.  Lots of spectators along the course (mostly locals) made for a great ride, and it was nice to have strangers cheering for you.

With the bike segment done, it’s time to switch to run-mode.  Legs are tired, and earlier there had been some cloud cover, but of course during the run segment the clouds were gone so the heat was intense.  Olympic distance is only 6 miles, and thankfully my training by running in the middle of the afternoon during the summer helped a lot once again.  I won’t say I was completely immune to the heat, but I could tell the difference as opposed to the last time I ran this race.  The race organizers (MultiRace) had plenty of aid stations on the run course, well-stocked with water, Gatorade, ice, bananas, oranges and gels. The run is only one big 6-mile loop along the beach, and a little breeze off the ocean helped a lot.

Finally, I’m back within view of the finish line.  I can just see Terri in the finish chute (she opted for the Duathlon) cheering me on, so I find another gear and bring it home.  She’s laughing and crying and putting a medal around my neck. Everyone’s cheering and I’m grabbing bottles of water and looking for a shady spot to sit.  After all the post-race festivities, we headed back to our hotel to get cleaned up and ready for the big after party at Charlie Mac’s (which just happened to be around the corner from our hotel)!

The race was excellent as always, even if it did signal the end of the season, and we will be back again next year. Currently we are in the planning stages for what races are on our schedule for 2019, and still looking ahead to 2020 with my goal of my first full IronMan in Cozumel!

Triathlete willing to share his experiences, knowledge, tips and stories with anyone who'll listen. :-)

This site uses Akismet to reduce spam. Learn how your comment data is processed.